An Israeli poet who immigrated to Palestine in 1935 when she was in her early twenties, Goldberg had a distinguished academic career at Hebrew University in Jerusalem until her death in 1970.  She wrote children’s books and translated European authors.  I don’t know much about her, finding this in an anthology of women poets.   I chose this image from ones available, as the years were not kind to her youthful beauty. 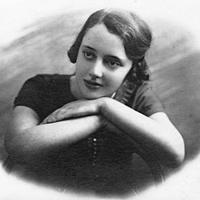 This poem has a long “runway” leading to the last two lines, which, at least for me, were a surprise at first reading.  The gender in the last line could be either.  In subsequent readings, it’s clearer that the trail to it was marked..  (Don’t cheat and skip to the end!).  This appealed to the same part of me that likes jokes with an unexpected punch line.  The “runway” also made for - like a good wine - a longer (emotional) finish. And the effect of more readings, like more sips of that wine, uncovers more of its depth.  (A Grand Crus St. Emilion like Château Le Dome would be right: like this poem, it’s better than its classification.)

My room is so small
that the days sneak in, humiliated.
I, too, live that way,
in the smell of smoke and apples.
At night the neighbors turn on lights
on the other side of the yard.
They shine quietly
through the branches of the tall birch,
through the windows facing me.
At night sometimes it is difficult to remember
that once
somewhere
there was my own window.