"Phoenix Hairpin" (to the tune of) - Lu You (Song Dynasty)

Lu You, one of the four great poets of the Southern Song Dynasty, was also half of one of the great Chinese love stories.  That story has: a childhood true love leading to marriage; a disapproving and jealous mother-in-law; lovers forced to split up; a bittersweet - and brief - reunion; and a tragic death.  All of it memorialized in poems - now almost 1,000 years old! - by the participants, poems that can be seen inscribed on the walls of the place where the key event occurred.  (No wonder the story has been made into at least one TV show...)

The love of Lu's life was his cousin, Tang Wan.  They had grown up in the same household and wedded when he was twenty, but married life lasted only one year, as his mother never liked Tang and forced Lu to cast her out and divorce, which he did out of filial duty.  Lu moved away to continue his studies and a career of many ups and downs whose focus was regaining northern China for the Song Dynasty.  (Lu You is known as the "Patriotic Poet" for his many poems - several thousand of  which survive - urging the unification of China.)


Almost ten years after the divorce, Lu had a chance encounter with Tang Wan and her new husband during a visit to the Shen Garden (in modern day Shaoxing).   Societal rules did not allow them to speak directly, but she received permission from the husband to have contact.  The sources I've read conflict on whether she sent a servant to him with wine or handed him the cup herself.  Regardless, it is said her eyes were brimmed with tears, that he got drunk on the wine, and then composed immediately this poem on a wall of the Garden.

Later, Tang saw the poem and wrote one in reply, also on the wall.  And there the poems are today, side-by-side. 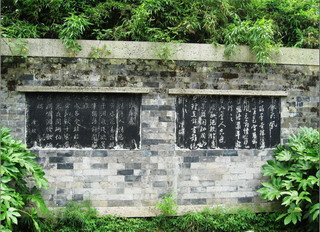 
In 1199, some forty years later, when he was seventy-five years old, Lu You revisited the garden and wrote two poems - "Shen Garden" - recalling the event.


This poem is in "Ci" form, which are meant to be sung.  A tune is selected first, to which words are then written.  It is not uncommon for different poets to use the same tune but write different verse to fit it.

Pink soft hands, yellow rippling wine,
The town is filled with Spring, willows by palace walls.
The east wind is biting, happiness is thin,
heart full of sorrow, so many years apart.

Spring is as of old; the person is empty and thin.
Traces of tears show through the sheer silk.
Peach blossoms falling, glimmering pond freezing,
The huge oath remains, the brocade book is hard to hold.

Lu You -  1125 – 1210, Song Dynasty
Note: This poem also shows how hard it is to translate poems from Chinese.  The forms are SO different, each character's meaning so rich that it needs, in English, several words to explain.  The triple "wrong" meant that it was wrong for them to end up apart; wrong of his mother to drive her away; and wrong of him to obey mom and leave Tang. “East Wind” refers to his mother and the rules that made him obey her wishes.  He and Tang are the willows separated by the palace wall, ie. the rules that didn't allow them to talk directly.  The tears on the silk are her tears from their encounter.  The “brocade book” refers to his work and career.