" It Is Marvellous..." - Elizabeth Bishop 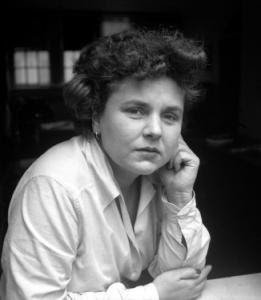 I know that I am supposed to like Elizabeth Bishop (1911 - 1979) and I certainly respect her work - but she has never been appealing personally except for her translations of Brazilian poets.  As the biographical synopsis tells (click on her name above), she had a tragic personal life one wouldn't wish on an enemy.  Her father died when she was one year old, her mother placed permanently in a mental institution when Elizabeth was five years old, and later, her long-term lover in Brazil committed suicide.  Wealthy grandparents provided an education (Vassar) and financial freedom which led to travel abroad and, eventually, fourteen years in Brazil until returning to the USA in 1970 to teach at Harvard.  Work published work in her lifetime - only 101 poems - was good enough to win both a Pulitzer and a National Book Award for Poetry.  Her reputation has grown in stature since her death.
This poem IS marvellous for how it paints scene, setting, and atmosphere to perfection.  The details build unrushed to the final result the way a cook adds each ingredient, in the right amount and at the right time, to make an edible perfection.  (I was making a smoked salmon corn chowder yesterday.)   Enjoy!
----------------------------------------------------------
“It Is Marvellous…”
It is marvellous to wake up together
At the same minute; marvellous to hear
The rain begin suddenly all over the roof,
To feel the air suddenly clear
As if electricity had passed through it
From a black mesh of wires in the sky.
All over the roof the rain hisses,
And below, the light falling of kisses.
An electrical storm is coming or moving away;
It is the prickling air that wakes us up.
If lightning struck the house now, it would run
From the four blue china balls on top
Down the roof and down the rods all around us,
And we imagine dreamily
How the whole house caught in a bird-cage of lightning
Would be quite delightful rather than frightening;
And from the same simplified point of view
Of night and lying flat on one's back
All things might change equally easily,
Since always to warn us there must be these black
Electrical wires dangling. Without surprise
The world might change to something quite different,
As the air changes or the lightning comes without our blinking,
Change as the kisses are changing without our thinking.
Elizabeth Bishop
Palimpsest at 11:06 PM